Two thousand years of shell cameo made by hand,

What is a Cameo?

Let's start with a definition of this work and then we'll focus on its history.

The cameo, as indicated in the definition of the most comprehensive dictionaries, is literally: "a hard and layered precious stone, varying in color, engraved or carved."

So this means that cameos are all engraved on stones ....

And the Shell cameos? you would ask maybe?

The most famous and most beautiful antique cameos

As for the cameos carved on stone, those who come to us from ancient times, and dare I say now famous, are the portrait of Augustus at the British Museum and the Renaissance cameos of the Medici and Gonzaga collections.

These masterpieces are still present nowadays with the opportunity to be seen in the most famous museums in the world. 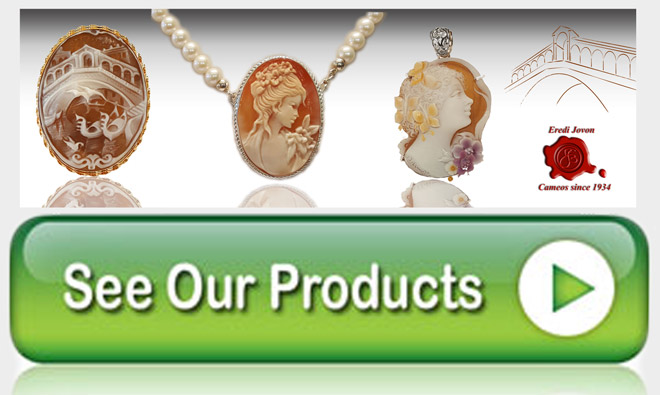 When were shell cameos born?

With regard to the cameos on shell, their history is much more recent: they born in Italy!

The use of shells dates back, according to the most recent studies, to the discovery of America. This material, until then unknown to Europeans, was imported from the New World, and often used as ballast for the ships that transported it.

These shells have differentiated layers of color and, thanks to the different colors, lend themselves to etching or carving work.

The shells to create a cameo engraved by hand

What shell cameos are made of?

I invite you to read an article that only talks about the sea shells that we use for our jewels and the three tricks to recognize a true cameo from a fake one.

Shell cameos have gained, over the years, increasing support, since the resulting incision and figure are more detailed.

The contrast between the two stratified colors donates, also, greater emphasis and a sense of three-dimensionality to the finished work.

The shell allows you to bring out and isolate the engraved figures, playing on the contrast between the background, dark and glossy, and the outer layer, clearer and opaque.

The affirmation of Liberty, with the naturalism steeped in symbolic meaning and the taste for the decorative, was the golden period of this process. 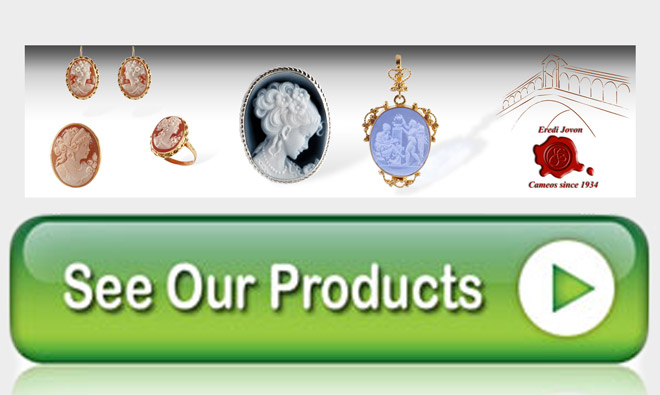 The portraits on Cameo

In the past, as there used to be no photos, the cameos became portraits. The noble families used to get artists to portray their daughters onto cameos to show them in the various courts, to find a husband and possibly a good catch.

Sometimes the portrait was more beautiful than the real person because the artist was asked to improve the defects of the subject. This made the engraver of the past a forerunner of Photoshop.

If you would like, send us your photo and we will send you a free quote for your custom cameo.

For more information I invite you to download our free book on this magnificent work.

The biggest hug in the world,

Related posts, maybe you wanna know something more about: 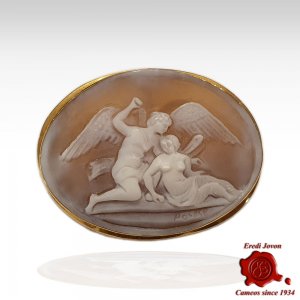 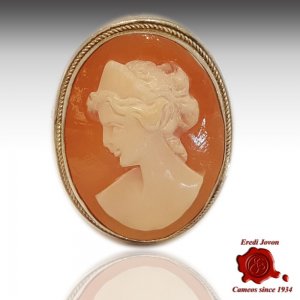 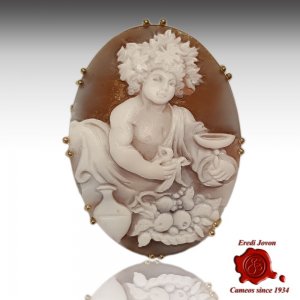 Available
Caravaggio's Baccus Cameo in Gold - Cameo representing the famous Baccus from Caravaggio: 40 mm. Sardonica shell cameo completely handmade in our laboratory and set in gold 18 kt./750% Possible to use as brooch and pendant or clasp for a necklace Museum Quality, one of the kind
Cameos Antique Victorian Vintage

Eredi Jovon
bacco-caravaggio
EJ2551bacco-caravaggio
€1,200.001200
Caravaggio's Baccus Cameo in Gold - Cameo representing the famous Baccus from Caravaggio: 40 mm. Sardonica shell cameo completely handmade in our laboratory and set in gold 18 kt./750% Possible to use as brooch and pendant or clasp for a necklace Museum Quality, one of the kind

Available
Genuine antique Edwardian cameo beginning of '900 in shell, 40 mm. brooch and pendant on a sterling silver set: one of the kind
Cameos Antique Victorian Vintage 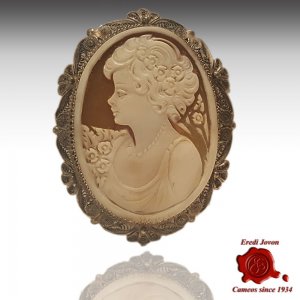